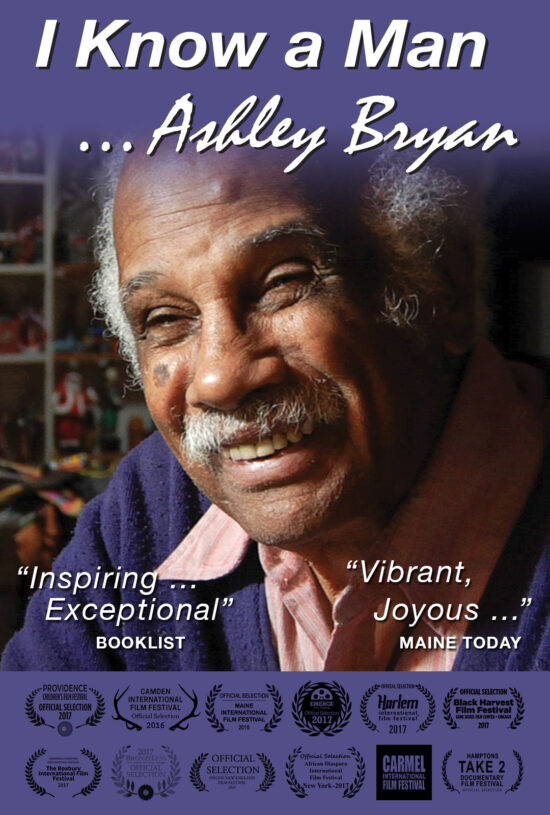 I Know a Man...Ashley Bryan

I Know a Man … Ashley Bryan, the feature documentary and winner at 15 film festivals produced by Richard Kane and Robert Shetterly, has begun to tour Maine theaters.

We are pleased to present this free screening, in partnership with the Lincoln Theater, in celebration of the memory of Ashley Bryan and the incredible impact he had on Maine communities.

Ashley Bryan, the celebrated children’s book author and artist, died on Friday, February 4, 2022 at the home of his niece Vanessa in Texas at the age of 98. We are pleased to present I Know A Man… Ashley Bryan, in partnership with the Lincoln Theater, to celebrate the memory of Ashley Bryan and the incredible impact he had on Maine communities.

The documentary I Know a Man … Ashley Bryan, by Sedgwick, ME filmmaker Richard Kane and Brooksville political artist Robert Shetterly is said by some to be an antidote to the hatred, racism and division that our country is experiencing today. The film is about this 90+-year-old creative wonder who skips and jumps in his heart like a child. Born in Harlem and raised in the Bronx, Bryan’s talent was nurtured by artist Romare Bearden. Ashley Bryan was drafted out of college at Cooper Union in New York City into the segregated US army at age 19. He served in an all-Black battalion during World War II and preserved his humanity by drawing, stowing supplies in his gas mask. For the past 53 years he had been living on the remote Cranberry Islands, Maine, and has been using art his entire life to celebrate joy, mediate the darkness of war and racism, explore the mysteries of faith, and create loving community. He is a poet/illustrator of over 60 children’s books, and makes magical puppets and sea glass windows from found objects inspired by his African heritage.

The film explores his world from the time his father “was given the mop and the broom”, (a reference to Gordon Parks’ famous photograph American Gothic). In the film he quotes Marian Anderson admonishing “to keep another down you have to hold them down, and therefore cannot … soar to the potential within you.” He spreads beauty through his linocut prints exhorting “Let My People Go.” His life story and the art he makes from this wellspring of experience is an inspiration to people of all ages. Ashley urges us to seek unity over division, peace over war, and love over intolerance and bigotry.

According to his publisher at Simon & Schuster, Ashley Bryan was “An early, quiet, and potent force in bringing children of color and issues of racial diversity into the canon of children’s literature, he was committed to opening the eyes of children of all backgrounds to a wide range of themes through poetry, folktales, spirituals, and biblical narratives”.

The film on Ashley Bryan’s life and art was produced by Richard Kane and Robert Shetterly of the Maine Masters series of films on exceptional Maine artists. Ashley Bryan is the author of over 60 celebrated children’s books, winner of the New York Public Library’s Literary Lion, several Coretta Scott King awards, and the Newbery Honor for one of his latest books “Freedom Over Me,”reviewed in the NY Times.

“800 years from now we’re still gonna have Ashley Bryan puppets… and paintings because he’s opened up the world.”

This film is not rated.

As of March 16, 2022, The Waldo is no longer requiring proof of vaccination, and has shifted to "masks optional". We are limiting our capacity in order to provide space between patrons. Thank you for your care and understanding.